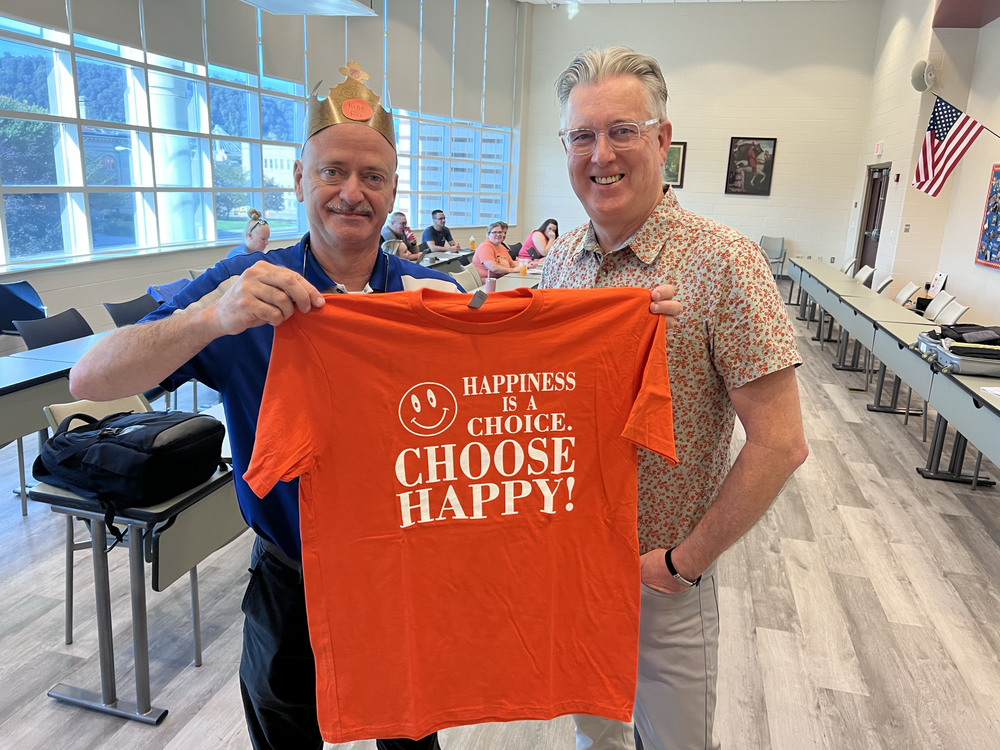 A select group of staff from Portsmouth City School District was invited to be among the first to participate in Orange Frog training, in the Multipurpose Room of Portsmouth High School on Aug. 9. The Orange Frog program is all about positive psychology and a better sense of wellness, says trainer Bill Palladino.

“There’s been a lot of research over the last two decades with brain science and positive psychology. A lot of discoveries suggest that brains that are in a more positive state-of-mind perform better and are more productive. We are using that research to give these folks some tools on how to make themselves happier but also teach them how to spread that,” Palladino said.

The program is based on the work of Harvard researcher Shawn Achor, who introduced the science in his book “The Happiness of Management.”

“We have taken his work and transferred it into this parable called the Orange Frog to make it easier for people to understand,” Palladino said.

The staff was first introduced to the Orange Frog program during a technology conference in January. Immediately they began asking for this at Portsmouth City Schools.

“The program asks people to take a look at themselves and set goals for themselves. Not only does that affect them, it also affects the staff and students, and eventually it will spread out into the community as well,” said Josh Morris, assistant superintendent at PCSD.

The pilot group participated in a training event in Deercreek last month, and Palladino led them in more training at Portsmouth High School on Aug. 9. Once complete, this initial group of staff members will go into the district and train everyone else on Aug. 22-24 on how to employ Orange Frog techniques. Palladino will also return during those training days to help answer questions about the program.

“Happiness is a choice that all make each and every day. This is a chance to express that with our fellow staff members, our students, and our community. Anyone we come into contact with throughout the day, and each other. We’re training everyone that’s part of our staff in the district; our bus drivers, cooks, custodians, secretaries, aides and teachers –  everyone will receive this training,” said Portsmouth Superintendent Scott Dutey.

Morris said it is their goal to have every member of the district trained within the first three or four teacher workdays of the new school year, which begins on Aug. 29.