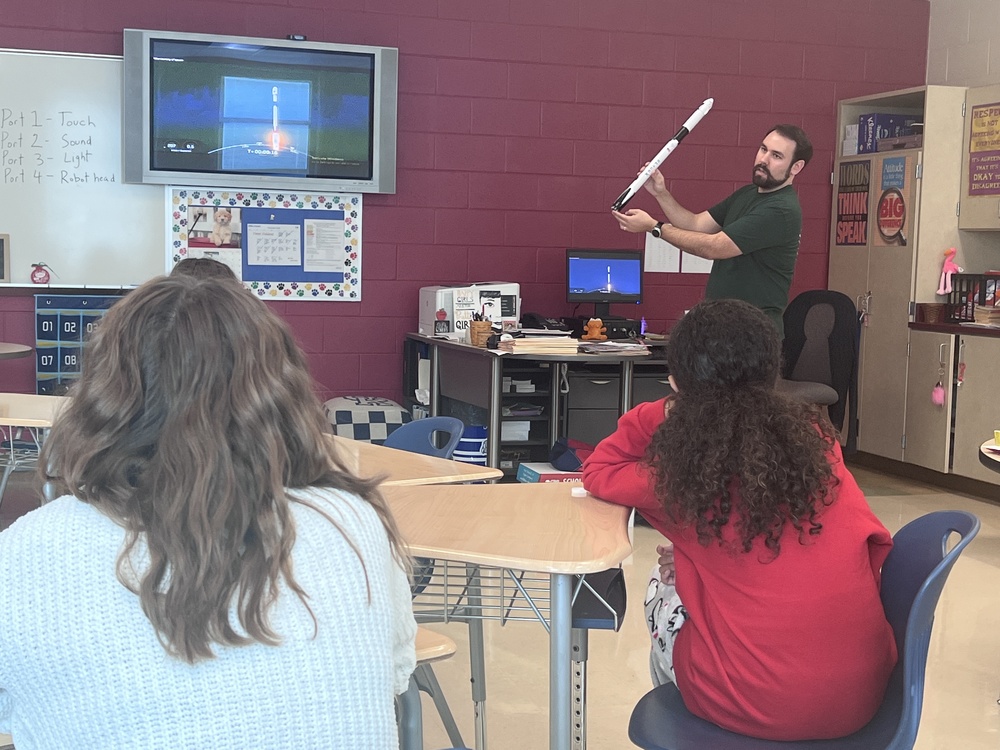 Students from Portsmouth Elementary visited the high school on Thursday to listen to guest speaker Josh Huffman tell them about his exciting job with SpaceX.

Huffman is a Portsmouth native who worked for the district’s technology department while he studied computer sciences at Shawnee State University. After graduating from college, Huffman went to work for GE Aviation in Adams County until he was offered a job as an electronic technician working on the Falcon 9 program for SpaceX in Waco, Texas.

SpaceX is an American aerospace company founded in 2002 by Elon Musk with a mission to usher in the era of commercial spaceflight, and Falcon 9 is a reusable, two-stage rocket designed and manufactured by SpaceX for the reliable and safe transport of people and payloads into Earth orbit and beyond. To date, the Falcon 9 rocket has been launched 188 times, with 146 successful landings. The reusable rocket has been flown 125 times.

“I would swap flight computers and electronics on the rockets before test, and we would install any type of sensors they needed for measuring vibration or temperature or cameras,” Huffman said.

He spoke with students about his experiences working with SpaceX and the many different programs SpaceX currently has in development, such as the Falcon Heavy commercial starship, and Starlink satellite systems. Passing around models of the rockets and actual fragments that have traveled to space, Huffman showed students videos of the various rocket launches and testing and explained the mission of SpaceX.

“A big goal of mine is to get students interested in aerospace so they can be the career-makers of tomorrow. Hopefully, some of these kids here will get interested in stuff to spark an interest and they’ll get to work on jobs that haven’t even been invented yet,” Huffman said.

He told students that he was just like them, and if he could do it then they could also. He said no matter what they wanted to do, whether it’s in the sciences or arts or whatever they choose, they can succeed if they work hard and give it their very best.

For more information about Portsmouth City Schools, visit them online at www.portsmouthtrojans.net, or follow the school’s page on Facebook.